Bed Bugs cause of stress and anxiety for homeowners and businesses owners alike. This is mainly due to the fact they are very difficult to get rid of and can withstand a very wide range of temperatures, DIY treatments and can live for months without food.

At Country Life Pest Control we know what bed bugs look like so if you have a potential infestation that is causing you concern, contact us now to book a Bed Bug inspection. We use many methods to find bed bugs and once we have confirmed evidence, then we will advise you of the treatment and steps that we can take to control of and eradicate the infestation. DIY solutions for control of Bed Bugs do not work and it can be very difficult to execute a bed bug solution on your own. You only need to miss just one egg carrying female and re-infestation will start all over.

At Country Life pest Control we have the training, hands-on-knowledge and the tools needed to seek out Bed Bugs, and, although there are a variety of crawling insects that bite our professional pest controller will upon through investigation be able to tell you if Bed Bugs are feasting on your blood during the night.

To the untrained eye, Bed Bugs, and signs of a Bed Bug infestation can be very difficult to see as they are extremely small and are expert in the skills of hiding. Fortunately, during a thorough Bed Bug inspection, our Bed Bug specialist is able to identify these signs and knows exactly where to find Bed Bugs. Once located and identified, we will advise you of and take the relevant steps to get rid of these Pesky Critters.

What are Bed Bugs (Cimex Lectularius)

Bed Bugs are parasites that rely on animal or human blood in order to survive and thrive. Active through the hours of darkness, these blood thirsty little critters emerge from their hiding places looking for sleeping human or animal hosts from to bite and draw a meal of blood. However, Bed Bugs are not known to carry disease but their bites cause serious skin reactions and are extremely stressful to live with. Adult Bed Bugs are wingless insects, reddish-brown in colour and measure approximately 4.4mm in length and are capable of surviving long periods on a single blood feed. 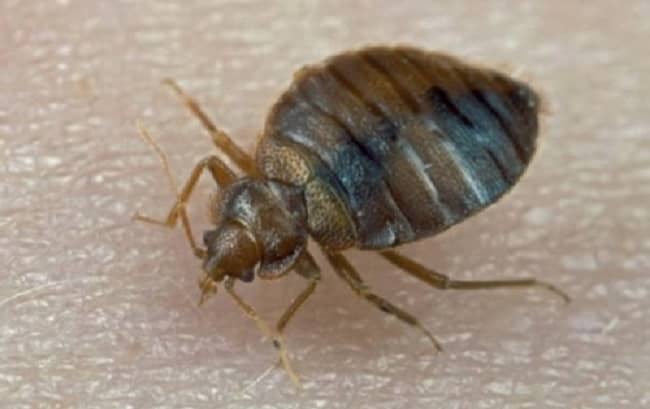 Are Bed bugs harmful or dangerous

Bed Bugs are themselves not dangerous and do not carry and serious disease either, unlike Fleas which are known for spreading diseases such as the Bubonic Plague and Typhus. But Bed Bugs do bite, and Bed Bug bites can lead to excessive scratching which can lead to serious infections. Being repeatedly bitten by Bed Bugs can become extremely uncomfortable ultimately leading to the development of Welts in many cases. Bed Bug bites also lead to sleep-deprivation.

A brief History of Bed Bugs

The first mention of Bed Bugs in the UK was in 1583 and were relatively rare until around 1670. Initially, these pesky little critters were introduced to our shores as passengers aboard trade and passenger ships from the Middle East and were probably considered then, as they are today, as “accidental invaders.” These stowaways travelled the seas safely tucked away inside items of furniture, trade fabrics and very often inside travellers personal luggage. Undoubtedly, and over a period of time, these cargo and passenger ships would have on board high levels of Bed Bug infestations and as a result the ship workers and passengers would suffer from Bed Bug bites.

As far as humans are able to ascertain, Bed Bugs have existed for millions of years, inhabiting the caves where civilisation began where it is believed they were once parasites of Bats before moving on to humans.

During the early 20th century, Bed Bugs were a common household nuisance thoroughly detested by their human hosts who considered them as filthy parasites. In the 1950’s DDT was introduced as a pesticide and was seen as the answer to all the worlds bug problems – especially where Cockroaches, Bed Bugs and Fleas were concerned. However, it was soon discovered that DDT caused more harm than good becoming a serious threat to wildlife - especially birds - which led to and inspired the book Silent Spring. Strong links between DDT and cancer in humans were also discovered and was also linked to infertility in men. Ultimately the product being banned worldwide. DDT was banned in the UK over 30 years ago.

Although Bed Bug populations noticeably decreased between the 1930’s and the 1980’s, their numbers began to creep up again in the mid to late 80’s, through the 90’s and the early 21st century more recently seeing a rapid resurgence. Ironically, this resurgence of Bed Bugs can be linked with man’s lust to travel the globe facilitated by the rise of cheap air travel which began in the 80’s, leading to history repeating itself and the “accidental invasion,” being once again reality.

Fortunately, modern science offers the professional pest controller chemical and non-chemical of treatments solutions such as heat treatment for Bed Bugs in order to help control these pesky little critters. If you discover Bed Bugs in your home it usually is the result of this “accidental invasion.”

Here are a few snippets of advice to help you avoid a Bed Bug infestation, and what to do if you discover Bed Bugs in your home or at your place of business:

If you have or suspect that you have Bed Bugs, call Country Life Pest Control now to discuss your requirements.